CIB Hong Kong shows us where to skate in their city 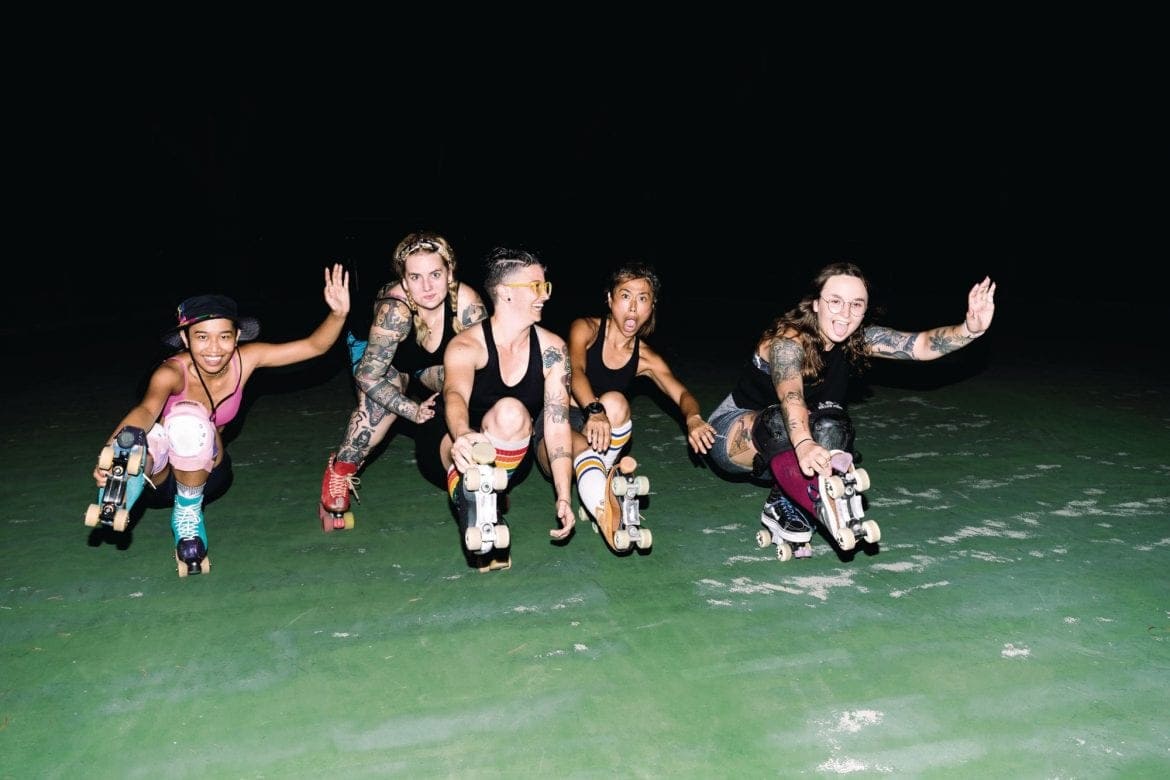 Roller skating in Hong Kong has been a thing in recent years. With the growth of CIB Hong Kong the quad skate scene is becoming more visible. Though still small, the core group of skaters are taking over the streets and parks. Because of the huge expat community, you also meet people from all over the world. We got curious and thought it was about time to take a closer look. Here CIB Hong Kong skaters Susanna and Milanie are giving us a deeper insight.

In Hong Kong there is a promenade favoured by skaters. It runs from a cargo pier in Kennedy Town, affectionately known as Instagram pier, all along the harbour front to the Central ferry piers, mostly evenly paved with bricks. The route encapsulates some of the best things about skating in Hong Kong, and some of the troubles too. Security guards occasionally stop skaters at the entrance, forcing them to go around on what might be one of the roughest streets in the city, a nasty surprise for beginners, and sneak in through a little side entrance. Everyone loves the promenade; joggers looking at their phones, couples taking selfies, groups of elderly people taking up all the benches and children on scooters. Everything you need and more to improve your dodging skills.

It was on this promenade that I met Charley and Chelsea, out on their skates for the first time. Chelsea was carrying a large pack of loo roll, or toilet paper, and so instantly begot a derby name, Loo Roll, without ever having joined a practice. The path goes through the Sun Yat Sen Memorial Park which is widely and gloriously paved with polished concrete. Here, the skaters spread out to show off their tricks, from fast turns and backwards skating to shooting the duck. Children cry out and point at us, some people take videos, and some, of course, complain. There is a short section through the Macau ferry terminal parking lot, I only once got chased out of there by a security guard, and then you are back on the bricks for the home stretch to the piers. Everyone goes at their own pace, and meets up at the Discovery Bay pier bar, also known as Beer bay. In those three kilometres we skate with an almost childlike abandon and awe. In the summer, the breeze from the water makes you forget how much you are sweating. The view reminds you how beautiful Hong Kong can be and with every roll over the bricks, you can feel the stress from your day dropping away. 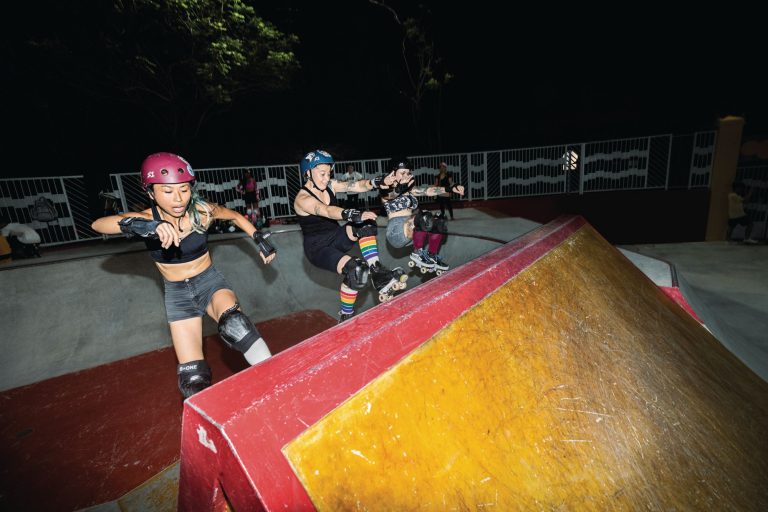 Hong Kong only has outdoor skating spaces. As much as the intense heat and heavy rain discourages people from going outside: we do not really have a choice. You learn to carry a water bottle on you always and most skaters list a towel or sweatband as an essential skating item. Victoria Park in Causeway Bay is popular for its large and small skating rinks and every night of the week sees a different crowd. Madame Quad, the local quad skating shop, offers rentals and guidance for beginners here on Monday nights and runs the derby practises on Tuesdays. The skating community is certainly growing and deeply reflects Hong Kong’s own local and expat community, with people from all over the world.

The first time I came to a Monday night skate I was surprised at the huge group of people gathered around the rink, with native English speakers being the minority. The local Cantonese skating community has clearly been here for years, most skating in professional skates bought from China or Europe. There are inline speed and trick skaters, artistic skaters, and jammers, all doing their best to share the smooth, yet limited, space. Space is only available at a premium so smooth skating is often not an option. On Hong Kong’s streets, no one is a beginner for long. The rough conditions force you to learn quickly. The lock block paving, or ‘murder bricks’ as Charley calls them, make your teeth rattle in your head but are preferable to the rough concrete patches that stop your wheels instantly. The sidewalks are often lined with barriers forcing you to compete with pedestrians when crossing the road. You need to keep a keen eye out for people looking at their phones and always give right of way to the street cleaners. Also, always remember that no matter what you think, you cannot roll over the Tram tracks you have to step or jump over them. After all this harrowing learning, it is incredibly empowering when you manage to skate all the way home or roll into work amidst the awe of your co-workers, even if you are dripping in sweat. Many skaters here prefer the harder hybrid wheels that make them more manoeuvrable. 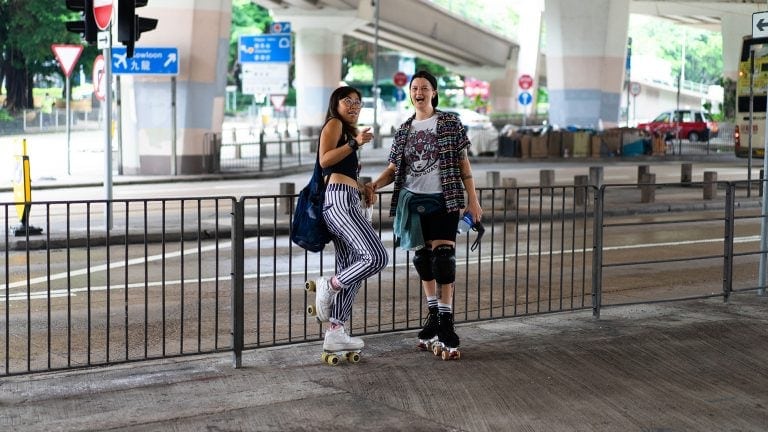 Skating woke me up to the city that I live in. When I skate around my neighbourhood in Tsim Sha Tsui, I see the scars of the recent protest movement during which students dug up the bricks of the sidewalks to create barriers in the roads. The government poured rough concrete into these gaps, making unrollable black and grey patches and each time I have to toe-stop around them, I remember those struggles. I now research new routes and roads, often taking me out of the city into the surrounding territory.

The CIB Hong Kong chapter has a solid group of skaters

The Tolo Highway cycle track is one of these new discoveries. It runs next to the highway, from Tai Po to Shatin, all along the water and separated by a fence. It is the smoothest, widest cycling road and has lanes for dividing the traffic. Guillaume, an experienced skater originally from Quebec, brought me here for the first time and he had to keep circling back for me because I was cruising along so slowly, mesmerized by the view and the quiet. I could hear my wheels rolling over the road, something that only ever happens on bricks. People from all over the area come to Tai Po all the time to cycle the route. But I never did, it seemed like too much trouble. Now that I have skates, all I want to do is find new places to skate.

The skate parks here are still mostly dominated by skateboarders, BMX’ers, and scooter kids, most of them boys, though this too is changing. The CIB Hong Kong chapter has a substantial group of quad skaters attending meet-ups, though getting into the skate parks is a challenge all by itself. Out of the 12 or so skate parks around Hong Kong, we roller skaters are only allowed into three of them, all because our roller skates do not match the picture of what is allowed in the park…the picture of an inline skate. We have managed to get ourselves into the parks by making our presence known, and by knowing the right people. Our CIB chapter is running a 52 Skatepark Sessions challenge to encourage more skaters to go to their local parks, and make sure people see we belong there too, quads and all. The fight is worth it though because the parks are kept in pristine condition, and each park offers something unique. 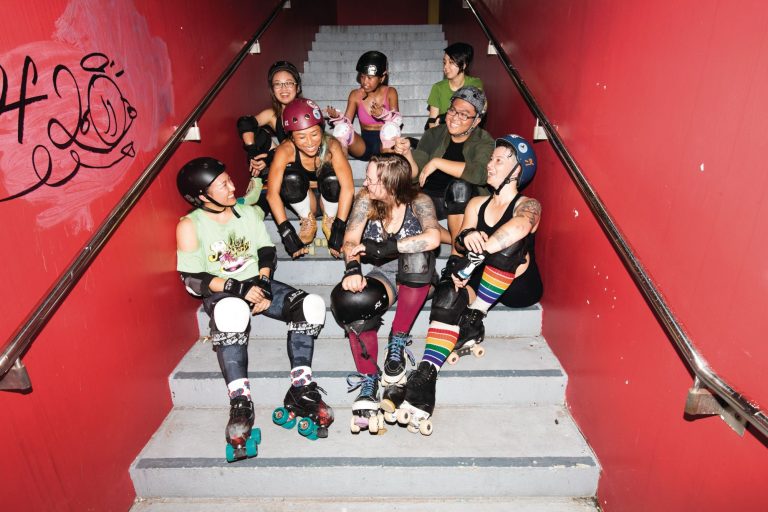 When it rains, we stare at our weather apps, text our friends around the city for local conditions and often end up carrying our skates around for the day. Ask most skaters what they would like to see in the future and the answer is, indoor rinks. Indoor rinks for derby, jamming, cruising and indoor skate parks. But it is more than that. We want to be a part of our city. It is not about doing tricks in the skate park or jamming in the rink. It is about being able to skate anywhere. In a city where you are so dependent on public transport, we want to commute safely on our skates. Many skaters fear that as skating gains popularity, security guards will become more vigilant in restricting access to spaces. There is often a struggle between what some may call bureaucratic nonsense and what we can see of the local people. Local Chinese people are not opposed to friendly skaters. They see us as entertainment, similar to the public karaoke singers and are not shy about taking photos and videos. My friend Dana was even asked to do a jump for a photo. She had to politely explain that she was not yet capable of ‘touching my skates to my bottom while jumping.’ Skating is good for people and for cities. It encourages exercise and exploration and can be a useful tool for healing. Hong Kong is a very stressful city for many reasons and we look forward to a future where we are accepted as a part of the cityscape along with the families, joggers, martial arts trainers and karaoke singers. We want to be a part of Hong Kong’s public space, not chased out but welcomed with a smile.

Under the Radar: Angel Lopez

Patina o muere or I lost my heart...