Thomas Kalak – Back in the Days

Thomas Kalak has been one of the big names in roller skating in Germany. Riding vert since 1979, he was part of a small scene. Still today he remembers his time on quads being the best thing that ever happened to him.

When we decided to do a history chapter in this edition ( The Yeah! Book.), I immediately knew that I was going to dedicate a part to German skaters. There are well known names like Hellge Tscharn, Martin Broich, the twins Arne and Lars Langguth or Thomas Kalak. Research wasn’t too easy though, especially when looking for photos. Barely anyone has them digitalized in proper printable quality. One guy who does and who actually has quite a story to tell is Thomas Kalak. When I got him on the phone he was enthusiastic about the idea of becoming part of an article. After he told me that roller skating had been the best thing that ever happened to him, I was sold. I really wanted to capture his story, or at least a small part of it. 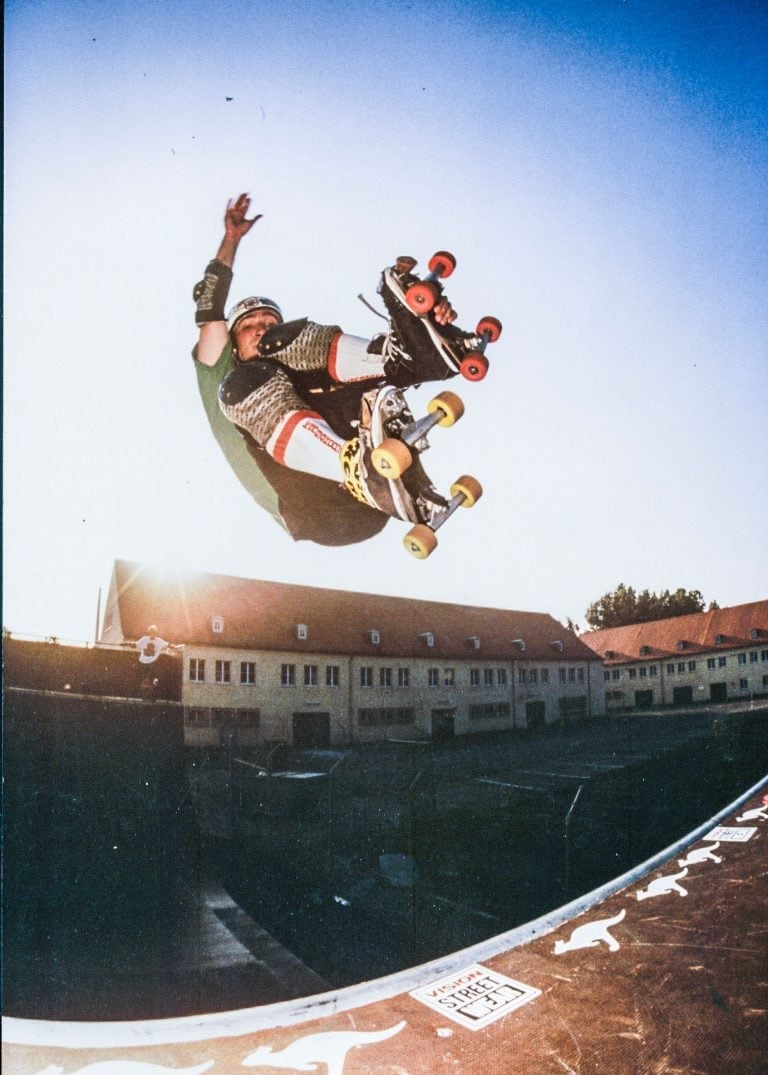 For a long time, Thomas Kalak has been one of the big names in roller skating in Germany. As many kids he started out with the strap-on ones. By 1979, Thomas was riding vert ramps. “Shortly after watching a video starring Fred Blood and Duke Rennie I knew that was what I wanted to do”, he says.

Thomas Kalak was a local hero in the tight-knit community

At that time, the scene in Germany was tiny. “Skateboarding was so small and roller skating was even smaller. We were a tight-knit community”, he reminisces. It was a male dominated scene and contests rarely had 20 participants. In 1982 the Monster Mastership in Münster was established, a skateboarding and roller-skating contest that should later become the first world cup event. In Münster, Thomas was a local hero. “The world cups in ‘87, ‘88 and ‘89 were so rad. There were like 5000 people watching. In these three years I came in third, right after Brian Wainwright and Jimmy Scott”, he says. Unlike the US-Americans, Thomas was not riding side stance. “I liked it but I was so into parallel stance that I never switched. One of my favorite tricks at that time was a handplant 540 I invented around 1984. I worked on that one forever. The next European doing it was Marcos Longares from Madrid around six years later.” With his skills Thomas earned himself some sponsorships. One of them being Powell Peralta. 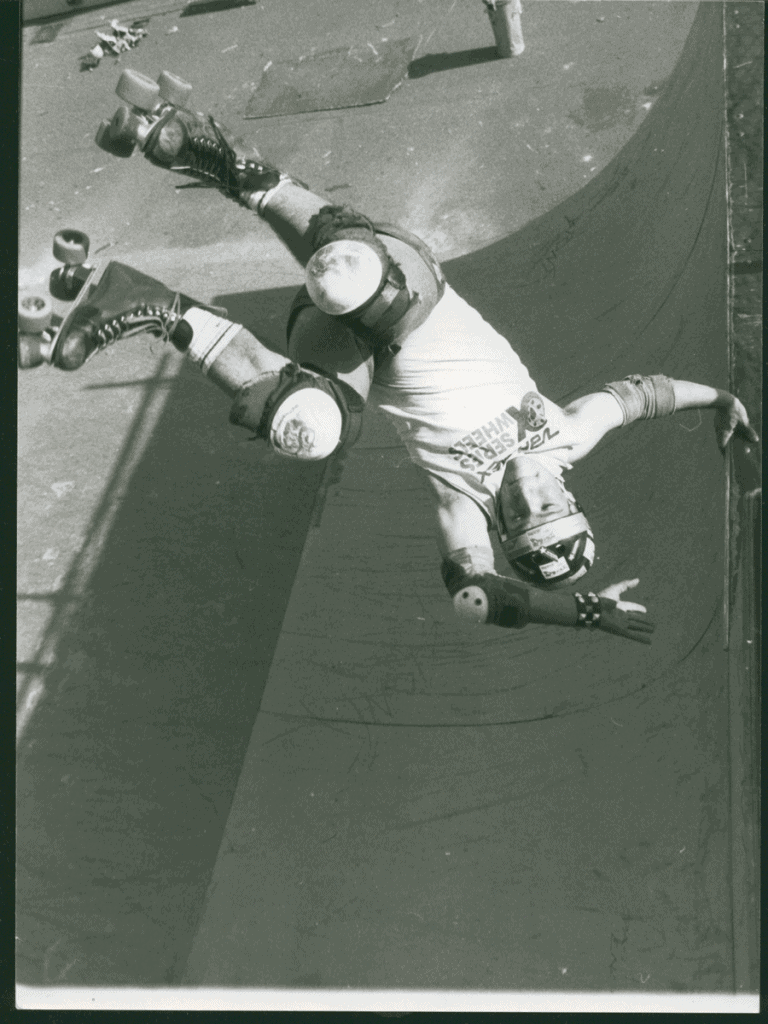 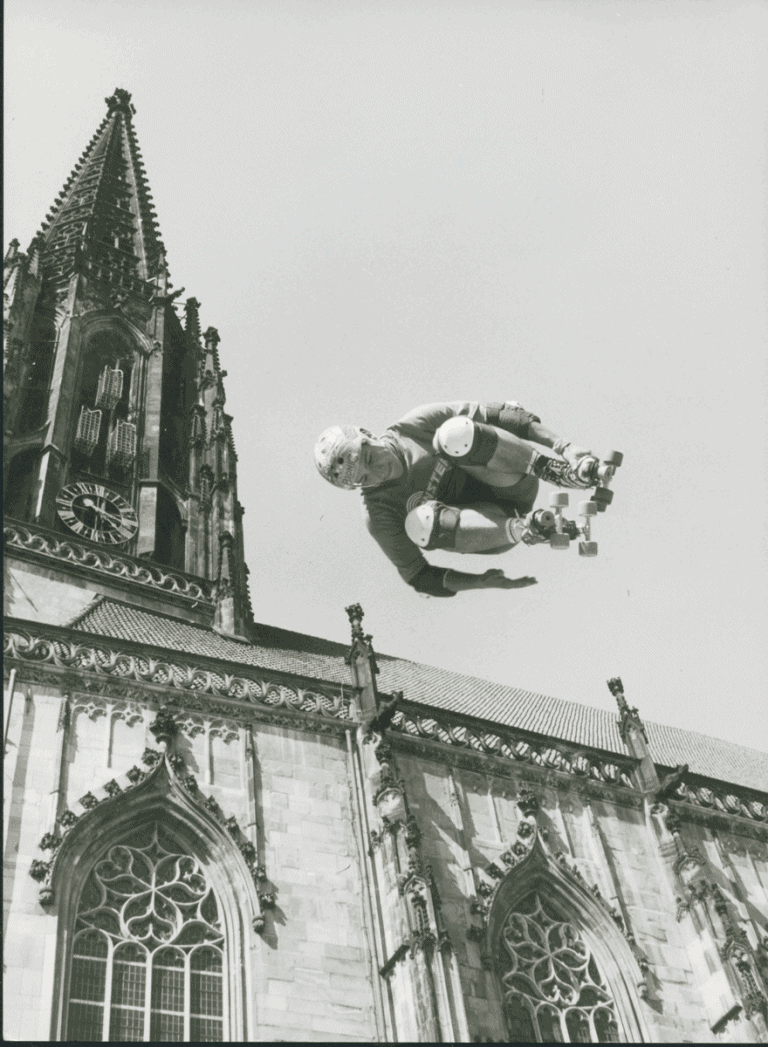 “My skate history has contributed immensely to who I am today”

The skateboarders and the roller skaters shared a common history. From an ideological point of view, Thomas says, it wasn’t that different. “We were free, creative, and first and foremost I came in touch with skaters from around the world at an early age. It was a privilege that widened my horizon enormously.” Something that was neither common nor granted at those times. The older ones among us can remember a Europe with borders and oversea flights being affordable for just a few people. “Back then I learned that there is far more than just my country and my culture. My skate history has contributed immensely to who I am today.”

In the 1980s Thomas started a career as a skateboard photographer. He worked for Monster Magazine and other international publications. Today he is a well-known photographer living in Munich. Thomas quit vert skating in 1995. “The last time I put on roller skates was in 2016. I fell badly.” Unfortunately, Thomas suffered from some health issues in the years prior. “I had a spinal stenosis and was almost paralyzed from my hip down.” After a complicated surgery he recovered well. “However, the motor skills in my feet don’t work properly anymore. But I will try to skate again.”

What it’s like to Roller Skate in a Rural Area

Roller Skating and Injuries – How I got...