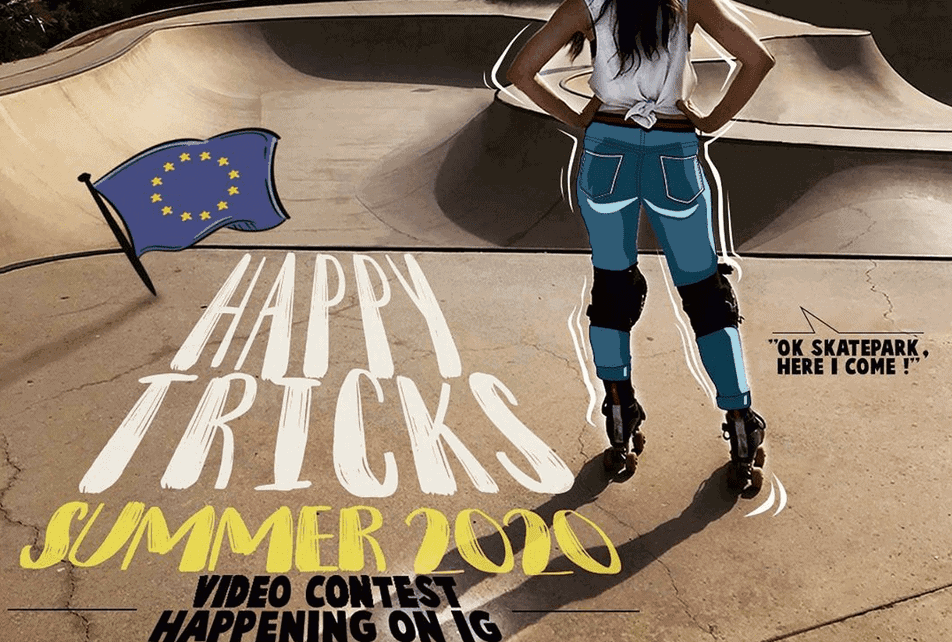 When a bunch of French roller skaters started the online challenge called Happy Tricks in 2016 its aim was to encourage roller derby players to conquer skateparks during the summer break. This year it has evolved into a Europe wide fun game. During August, beginner, intermediate and advanced roller skaters can compete, win prizes and above all: have fun and connect.

Happy Tricks was launched by French riders named Emilie and Romain. When it started in 2016, the virtual contest had one level, players submitted their tricks via commentaries on Facebook.

This year, the makers changed the Happy Tricks concept widely. Players can choose between beginner, intermediate or advanced level. The goal is to master 15 tricks, record a clip and share them on Instagram. Then the juries establish a ranking in each category. Winners are awarded a prize which their partners Easyriser Shop and Ride It! Clothes sponsor.

They say, that most of the time the two of them were alone on quads in parks. “People stared at us as if we were aliens”, they recollect. At that time, roller derby leagues were multiplying in France. That’s when the idea of Happy Tricks evolved. Its motto: “leave the track, go to skatepark!”.

The first edition in 2016 was a success, with more than 400 videos submitted by players. For the makers this was a surprise as they did not imagine so many people would be motivated. “We had so much positive feedback, so much people wanting to try, who dared thanks to the game! Other people came in groups to improve together.”

This year, a little community came to life

After two years, Emilie and Romain decided to hand over the game to two winners of 2017 edition: Marine @peachsampras and Virginie @virgetures. Since 2019, the main organization of the game is in Marine’s and Valérie’s (@valonskates) hands. They are supported by their three jury teams and by their partners Easyriser and Ride It! Clothes. Preparing Happy Tricks took them a lot of time – since Christmas, almost!

The evolution of Happy Tricks to a EU-wide challenge

Roller skating evolved a lot during last years. Not only in France but almost everywhere. The community got bigger. It was not only roller derby players but more and people who wanted to skate parks.

Last year, as the game was still only a French thing with two categories. The creators felt that opening a new level would be necessary in 2020 so intermediate roller skaters would stick with it. That’s why it’s now a European fun contest which we really dig.

What are the tricks and how are they chosen?

Marine and Valérie determined all the 15 tricks for each levels, following some precise criteria. In each level, a player must find (adapted following the category) :

You’ll find all tricks on the Happy Tricks Instagram profile. To make it easy to enter each trick has a video demo.

A jury and prizes for the winners

A jury of last year’s winner among other known  European quad sakters will judge the entries. You can check each jury’s composition in the Insta highlight stories.

The winners will be rewarded with prizes provided by Easyrider, an online skate shop based in Luxembourg, and Ride It Clothes from France. Roller skates, bearings, helmets, leashes, slider blocks and apparel is awaiting the Happy Tricks winners.

Check the Instagram page for more info on the game

How to pick the right Roller Skate Boot