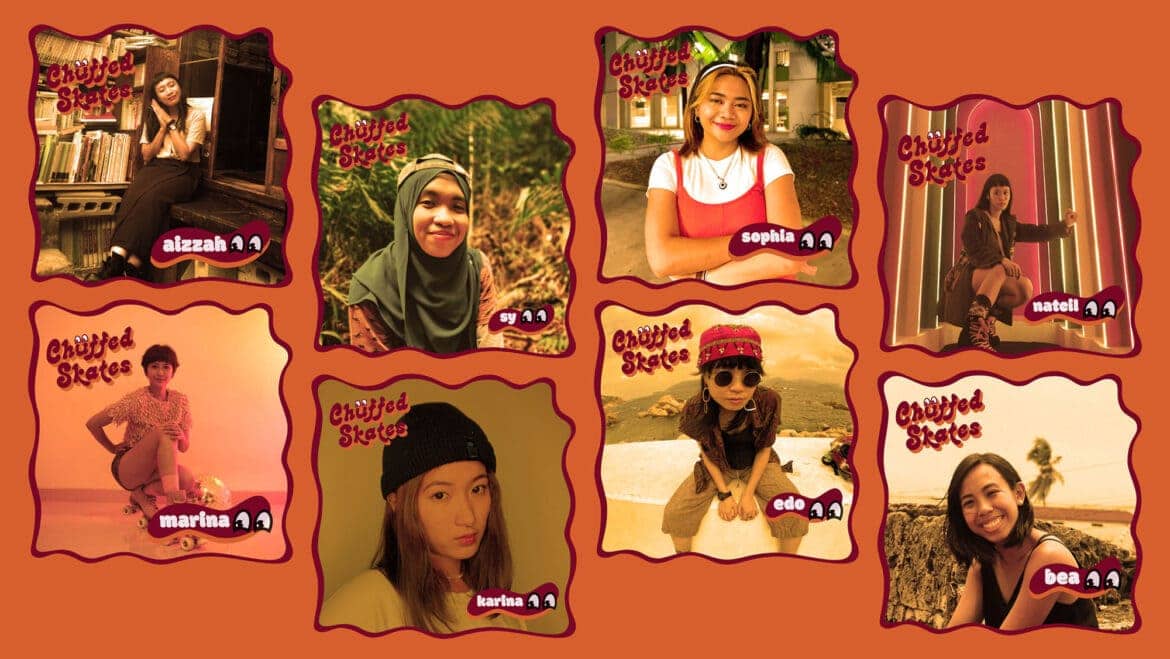 Roller skaters located in Asia are rarely represented in western social media nor by big roller skate shoe brands. Not to speak of all-Asian-skate-teams. But skating got more popular during the pandemic almost all over the world. Chuffed Skates founder Sam Trayhurn dug deeper into it and found quad communities in quite a few Asian countries, even in Brunei. She says, “if there is a belief that skating isn’t as popular in Asian countries, it probably just comes down to not looking hard enough”. Sam decided to look harder and just presented the Chuffed Asia skate team to the world. The skaters hail from Indonesia, Hong Kong, Brunei, Singapore, the Philippines & Malaysia. We reached out to Sam to learn more about the process and her intentions with creating the crew.

Tell us a bit about the background of your idea of creating a Chuffed Asia crew? This region is totally underrepresented when it comes to western roller skate brands.

The idea to create the Chuffed Asia crew came about because I noticed a lot of interest in our skates within Asian countries, and people started buying our skates. But, the more I started to follow and admire these communities, I realised that these skaters were not represented in our social media content at all.
Australian culture is very different, and rather than just resharing content from skaters in these countries, I wanted them to be a part of our brands journey. I strongly believe that seeing someone local to you or someone that you identify with doing something (like roller skating) makes that thing seem so much more tangible and possible. So, I guess I hoped that by introducing the Chuffed Asia crew, more people would be inspired to take up roller skating and could experience all the joy that comes with that. At the same time, through the program we could support the crew skaters to build their scenes locally.
I guess the core of the idea is that we really want to grow our presence in these countries through community, not just selling a product.

You guys from Australia are closer to these areas than Europe or the US are. From what you see: How popular is quad skating in Asian countries right now?

We are closer, but at the same time because Australia is totally locked down for international travel, we can only see these communities through social media. So, we kind of have the same access to them as the rest of the world right now.
I think that if there is a belief that skating isn’t as popular in Asian countries, it probably just comes down to not looking hard enough. The Instagram algorithms certainly don’t help, but I found that when I started to actively seek out Asian roller skaters and their groups, there were so many. For example, I had zero idea that there were roller skaters in Brunei, but actually there is a lot of them who meet regularly and have cool events like roller discos and skatepark meetups.
Just like in other places, there has been a real surge in new skaters across Asia during the pandemic. In countries like Indonesia, Singapore, Malaysia and Hong Kong the scene seems really active and quite large. In countries like the Philippines and Brunei the community seems smaller, but still with a lot of new people taking up roller skating all the time.
I haven’t really seen veteran skaters that have been quad skating for 10+ years like in the USA or Europe, but there are skaters who are developing their own unique styles away from those influences which is pretty cool. And like most places (thanks to access to social media and YouTube videos) everyone is learning very fast.

From which countries do the Chuffed Asia crew skaters hail?

How did you find the skaters and by what criterias did you choose them?

We put out a call on Instagram and asked skaters to submit a video of up to 1 minute as well as fill out a short questionnaire. Based on the applications we received, myself and the Australian Chuffed Crew went through a lengthy selection process. It was really hard, because we received so many good applications. The final skaters were chosen based on a lot of different factors. We were looking for those who showed a real passion for roller skating, creativity and style, involvement in their community, and embodied the Chuffed values. It wasn’t about being a pro skater with the best tricks. We were looking for the skaters behind the lens always documenting the scene and cheering everyone on. The ones who give lessons to kids in their apartment building during lockdown. Those who were already actively involved in building their scenes in so many different ways. All of the skaters we chose have already done a lot within their communities, and we wanted to be like, ‘Hey! We see you! Good job,’ and hopefully reward them for that in some way.

What were the reactions of the skaters once you asked them to be on the team?

Everyone was … Chuffed!? (Sorry, not sorry). They were pretty excited to be given the opportunity, and some seemed shocked because they had never imagined being sponsored. It was pretty cool to be able to deliver that news.

Which hopes and plans for Chuffed Asia do you have in these regions?

We want to do a lot, but we are a little bit limited until we get through the pandemic. For now, we hope to enable these skaters to continue to grow roller skating in their scenes and follow their own skate dreams. Down the track we’d love to run official Chuffed programs and events, and hopefully get everyone together in one place for a big Chuffed summit where we can set some goals together.

We received way more applications than we expected and would have loved to include more skaters because there was so much talent and passion out there. If skaters weren’t selected, we hope that they will keep rolling, and apply again in the future when we grow the family.
We received a few messages after applications closed asking how to apply in the future. If we put out another call, it will be on our Instagram (@chuffedskates), so be following us for future information.

Skate Love Barcelona: “I Would Love to be the Party Queen”

Basics Of Happy: “It Will Be a Movement...

California Dreaming: Caro Hernandez About Her Work for...

Under the Radar: Qiona Payton