California Dreaming: Caro Hernandez About Her Work for S1

Carolina Hernandez is not just a fabulous roller skater who has been around for many years. The Colombian is very involved in her local skate community and she’s been skating and working for S1 Helmets for quite some time. Once she heard that teammates from Australia, Argentina, Colombia, USA and New Zealand were going to attend the first Quad Cup in spring 2022, she wanted to bring a video project to life. Luckily, Dan at S1 supported the idea. With California Dreaming Caro literally made a dream come true by getting the international S1-Crew together to film a memorable session at Venice skatepark. We chatted with Caro about her work for S1 and the making of California Dreaming.

It’s really hard to measure! I think what I loved the most of the event was to be able to hang with my online friends in real life and enjoying a really fun sesh with them all. I’d rate it a solid 10 just for that aspect. I got to hang with friends from different states and countries, we all felt the same way, just stoked to be there and enjoy good energy all day long. Also it opened so many strong and good connections with new friends and good projects, it was totally worth it!

Spending two weeks in Cali knowing that amazing skaters from all over the world would be around for the first edition the quad competition, you wanted to get the most out of it and make a video. Where did the idea for “California Dreaming” come from?

The idea came the moment I realized the amount of friends who ride S1 planning on attending the Quad Cup, we were on a tight schedule so I contacted them and saw the possibility to meet a day earlier to enjoy a sesh and make a video out of it. California is full of roller skaters, they’ve kept roller skating alive with traditions of jam sessions, skate videos, and the big amount of roller skaters you’d see is literally like a dream! It’s a spot you must see at least once, especially when you come from a place where roller skating is smaller or limited due weather. That’s the whole why: most of the skaters featured come from small skate communities, and we were living the dream! Enjoying a sesh with inspiring friends, at the most iconic spot. Bringing outsiders to a place that we would like to share more often!

Was is hard to get them all to Venice at the same time?

It was a big crew to put up together, we were 12 people, but all of the skaters involved helped a lot! They went there, had the best energy, waited for us to get enough shots of each one, and genuinely wanted to be there. That’s something that matters a lot: the genuine and cool bond we all had. Props to each one for being so patient, trusting the process and caring so much.

You co-produced the video. Tell us a bit about the process.

I pitched the idea to Dan from S1 and he was amazingly supportive. From that moment we proceeded to contact the skaters we knew were attending Blading Cup and would be in LA for those dates. After finding a date that suited us well I checked who could be the videographer and a Colombian friend happened to be in LA (@juanibunny ), so we started to build the idea and the pillar elements that would be displayed: first was telling the audience why all this cool skaters gathered together, where are they from and then just recording them having fun. During the day we did short interviews, captured specific tricks or lines and checked we had enough content.

Juani put together the video, we already had the concept, music and how it would look like. The final shots were just us having a good time, I feel it captured the essence of what skate friends means to us and how fun is to open up to connect with other individuals while traveling.

Anything that didn’t go as planned? Give us some of the fun behind the scenes stories.

The only bad thing was a local being upset at me recording in the big bowl, at that point we were almost done, Venice is a packed spot, so it’s hard to take up space to film. Fortunately, we could have shots of everyone and had a good skate!

What was it like to meet and skate with so many of your S1 teammates for the first time?

I’ll never get tired to say that it was THE dream sesh! I cherish our friendships a lot, they’re really inspiring to watch live, many of them have been my online inspo for years, or we have met at different skate trips. The hardest part of this was to say goodbye and not knowing when we would meet again, crossing paths was a rare thing. We all agreed it was the best time and that we never expected to be all together from all around the world sharing and hopefully we will repeat it soon!

How happy are you with the outcome?

I loved it! It means much more than a brand video, it takes me back to that day and reminds me how fortunate we are for skating and how a skate sesh can give you so many new ideas, connections and good memories. We could have done something way more commercial, but having S1 trusting the process and letting us show what skating looks like for us is really meaningful! 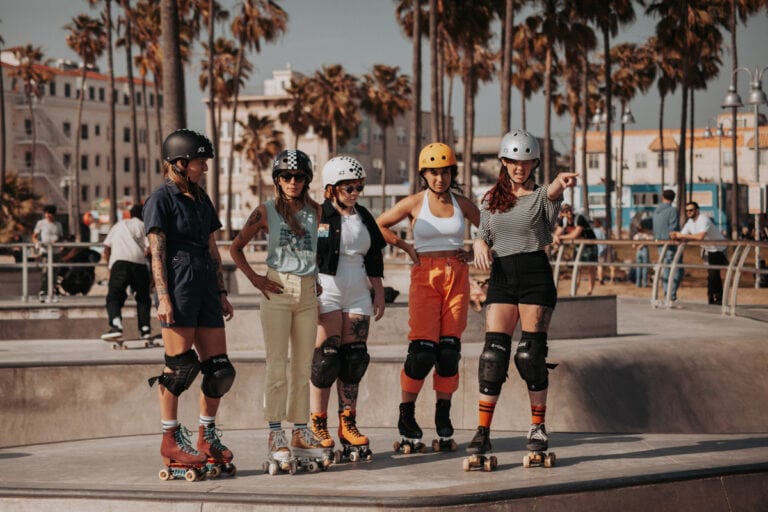 You are a sound engineer by trade but put your job on hold to pursue your skate career. You are pretty involved in S1 Helmets, not just as a sponsored skater but you also work for them. Tell us a bit about what you do for them.

For the past few years I’ve worked on their @s1rollerskate Instagram, doing graphics, writing blogs, directing some projects and contests in Colombia. Dan and Chris have given me a lot of creative freedom, I’m really fortunate and don’t take it for granted. My goal with the brand was to organically grow their Instagram, for the page to be a place where people could find inspiration to try new things. I try to learn the trick names, to mix the content so we see different skating. During the pandemic I also hosted a series of interviews with skaters from the globe (in English and Spanish). It’s a learning process and there’s so much to do! I also check the sponsorship requests and pass it to the brand.

Lately we are working with smaller crews or skaters to showcase their work in the community, we started with @malcriadamedia from Las Vegas, and finishing more interesting blogs. We also support Latin American crews like @patinacoco and @hellonquads. What I love most about this job is that we’re actually impacting foreign communities.

Genuine connections mean everything, as an individual, and the crew of skaters who we support and join us to events are skaters who put a lot to their craft and are amazing people. Now that the pandemic is over we’re looking forward to events and some cool things coming up!

There are a few brands that have an influence on roller skate culture. In which way you guys at S1 want to contribute to the community?

I see S1 as a source of skating inspo. All of the skaters we’re working with are genuinely in love with this! They put a lot into their craft while hosting events, putting up content, connecting with the community. We want to display that in future projects: what’s behind roller skating, who are the ones working locally to make this a safe place. Our platform has gotten bigger in the last years and we want to keep supporting the sport in all its facets: contests, meet ups, zines, audio visual content, and more. We clearly have limitations and work on doing as much as we can.

I’ve been skating for many years now, been hosting events in an underappreciated community, my goal now is to give more exposure to those who have been doing the work and don’t get enough credit for it. Hopefully with these new projects we share different narratives and ways to live skating!

Roller Skating videos not often go viral on YouTube. One that did was the S1 x Moxi Skates in 2014. It has more than 1.4 million plays on YouTube. I found this very inspiring and fun. Do you also remember seeing it?

Back in the day, Dan from S1 wanted to showcase Estro from Moxi with the goal of showing what was possible on roller skates in parks and bowls. At that time Estro was one of few park roller skaters, so Dan pitched the idea to Estro and together they came up with the concept for the video. Back then Bobby worked as S1’s filmer and was hired to film and edit it. That video was the first time a lot of people saw roller skaters in parks, throwing big tricks and it helped spark a whole generation of new roller skaters and park roller skaters worldwide. Same as to many, this video was the one that inspired me to keep skating. Skating is all about having fun on wheels and I appreciate how this piece portrayed skating back then. This is one of those videos that made a lot of skaters pop! It’s great to see how projects made out of friendship can change many people lives!

Under the Radar: Qiona Payton

Skate Love Barcelona: “I Would Love to be...