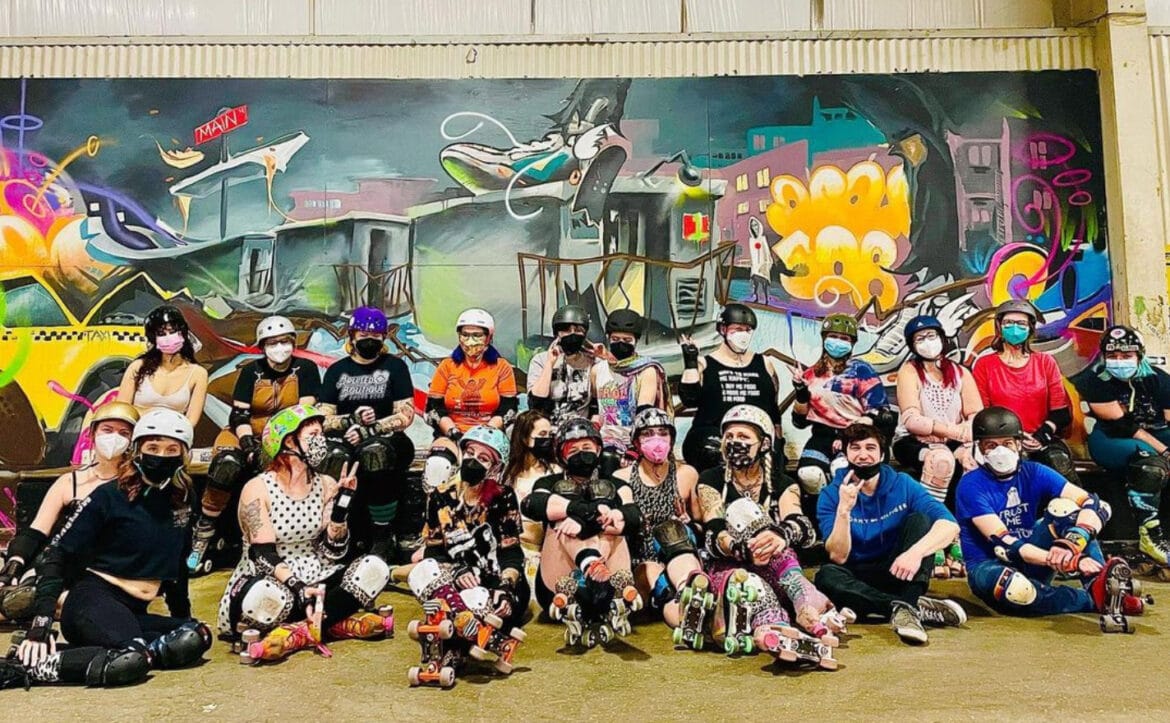 LonelyBones and Skate Hags are two Boston based skate collectives. They create spaces for marginalized skaters of all background. Their success shows the importance of representation and safe spaces.

It’s a snowy Monday night in January, and the parking lot at Saugus’s Roller World is full.  Inside, neon lasers, black lights, and disco balls spin overhead as groups cluster around plastic tables, sipping Cokes and lacing up their skates.  The rink itself is a swirl of activity: women dressed in metallic dresses or bellbottoms glide one-legged between pairs of beginners holding onto each other for support.  Courtney Love blares through the speakers.

This is not a typical night at Roller World—this is a Skate Hags event.

“It’s a very welcoming community that wants to see you achieve in your own personal goals, skating or not,” says Angela Deamicis, a 24-year-old Boston resident who frequently attends Skate Hags meet-ups.

Skate Hags is just one of the Boston-based skate groups created for female-identifying and non-binary folks, LGBTQIA+, BIPOC, and neurodiverse skaters. Along with LonelyBones Skate Co., a separate group with a similar mission, they are carving out a community where marginalized skaters can hone their skills and connect with people who have similar interests. 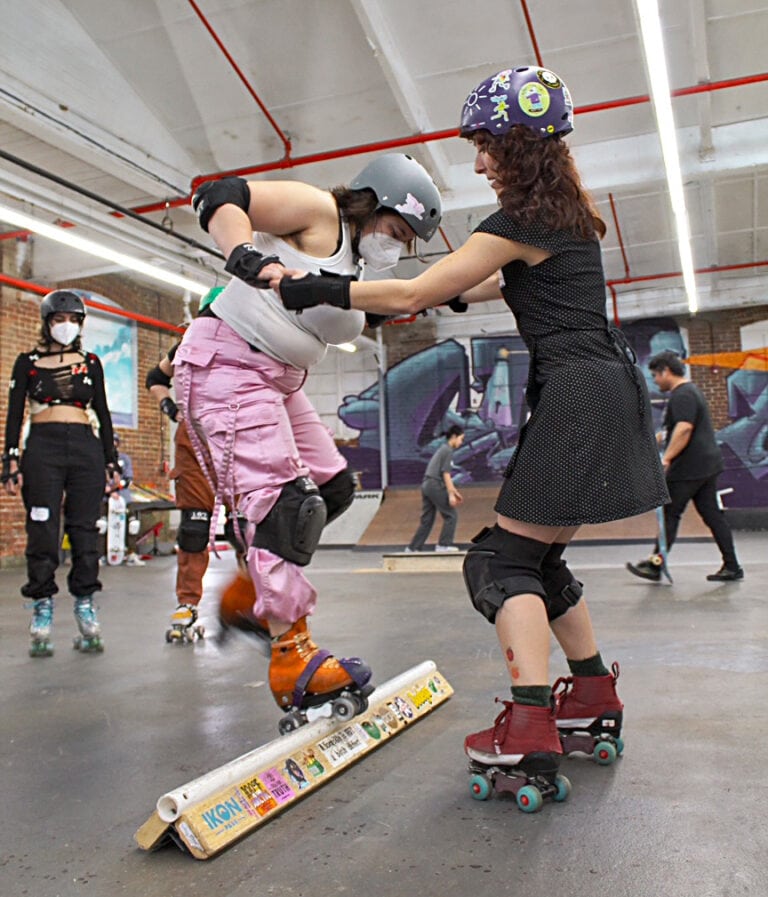 “It definitely feels more like we’re owning that space”

The tie that binds the groups is their focus on making space for skaters who feel out-of-place or intimidated at skate parks because of a lack of representation and acceptance within skate culture. Skate parks can be unwelcoming towards those that don’t fit into the white skater-boy archetype, but the founders of Skate Hags and LonelyBones are seeking to change this.

“I think that this world was very much created for white men. So, when they find something that they like, they kind of take an ownership over it, and are not very welcoming of outsiders,” says Claire Lee, one of the founders of LonelyBones. She adds, “The power in numbers totally helps.  When we roll up and there’s dozens of us, it definitely feels more like we’re owning that space.  We still have had a few run-ins with dudes being generally uncomfortable with us being there.  You can feel it, even if you don’t necessarily hear them say anything, there’s tension.”

Lee had a background in surfing and snowboarding, but found skateboarding more daunting because of the exclusivity surrounding it. After her boyfriend began teaching her to skateboard in 2019, she posted about it on Instagram, and her friend Rayven Tate responded with interest.

“I think that skating can be kind of hard to break into,” says Tate, a 22-year-old Northeastern graduate. “I wouldn’t have started skating had I not seen Claire post a video on Instagram, because I didn’t have a community where I could learn how to skate.”

In 2020, Lee and Tate decided to build this community themselves, and LonelyBones Skate Co. was born.

“A lot of it came from us talking to each other about how we felt and how things were, skating as non-traditional skaters,” says Lee of her group’s moral backbone. “And we realized that so many other people have this experience too, which I think is the most important part and kind of feeds into our name as well—everyone’s kind of lonely, I guess, and if we can come together and acknowledge that, then we can work towards fixing it.”

They held their first meet-up in August of 2020 behind the Boston Public Library, expecting a few of their friends to show up. When more than 60 people arrived, they realized this was something they needed to continue.

Skate Hags began around the same time when Jen Millis, who had been skateboarding for ten years and often found herself the only woman at the skate park, began learning to roller skate from her friend Octavia Bennett. The two were soon joined by Jen McMahon, and more of their friends followed. They committed to meeting every week in an empty parking lot behind a church in Waltham.

“The minute we started meeting up, we were like, okay, we’re going to do this every week.  It’ll be our little crew. We need a name, we need a logo…Jen McMahon coined the name and does all of our art,” says Millis.

Their crew quickly began to expand, relying largely on word-of-mouth along with their online presence.

“I really think it happened pretty organically. There were a lot of other people looking for a place to skate for people that were learning,” says Bennett.

Although the two groups are not affiliated, they have held events together in the past, and there is plenty of crossover with their members and message.

“It’s been really great to have the sort of reverberating energy between the two of our groups and the other groups in the Boston area…it’s a totally magical little thing,” Bennett says of LonelyBones.

LonelyBones and Skate Hags are supporting all wheels

LonelyBones and Skate Hags are wholly committed to their goal of supporting skateboarders and roller skaters of any gender, race, sexuality, and skill level. LonelyBones frequently rents out skateparks for their members to use, and Skate Hags has made use of the indoor Edge Skatepark during the winter months.

“Part of the design of Skate Hags, the secret backbone mission that we’re on now, is to get this crew of new skaters to be skatepark-savvy and fill the parks up so we can go to the skatepark at any time of day and you won’t be alone,” says Millis.

LonelyBones has taken a hiatus during the winter months, and have been using the time to cultivate several upcoming projects. They are currently working on a line of merchandise, and have plans in the works to start a scholarship and volunteer within the community.

“I think a big thing for us is to give back to Boston.  We’ve been here for five years, and it’s done so much for us, so that’s definitely one of our bigger projects,” Tate says. “I want [LonelyBones] to outlive us.”

How to Make DIY Sliders for Roller Skates

Barbie and Moco on Fears, Sponsors, and Taking Time to Breathe